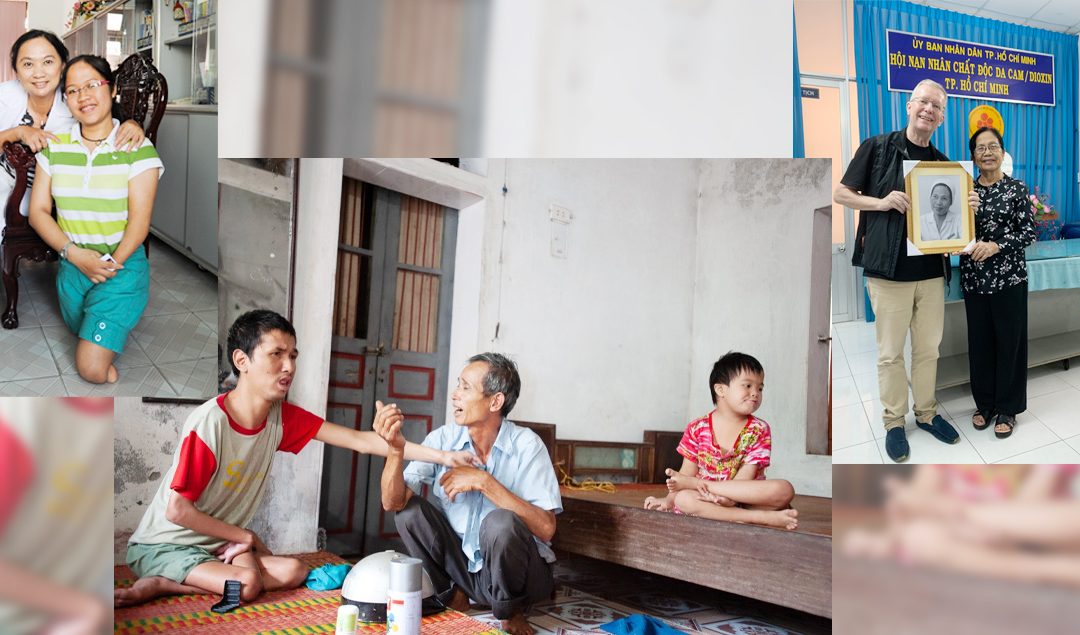 Vietnam and its people are many things to me. Most of them heart-warming and beautiful. So much that I dare to call Vietnam ‘Que Houng thu hai cua toi’. My second home.

I have some very close friends here, who continue to give me more, than I ever thought that I would have.

All the good things are a stark contrast to the very reason, why I came here as a young journalist almost four decades go: To report on the lethal legacy of war, Agent Orange.

During the so-called American War, the US Air Force sprayed 72 million liters of herbicides to defoliate the jungle and to destroy the food supply for the guerrillas operating from the countryside. Most of the herbicides were known as Agent Orange, contaminated by dioxin, by far the most potent synthetic poison, ever developed in a laboratory.

Even though I spent weeks of research before my arrival, nothing could really have prepared me for the actual experience, when walking the rounds at the Tu Du hospital in Ho Chi Minh along with Dr. Nguyen Thi Ngoc Phuong and her patients, young women who had come in from the countryside.

Two girls in every bed and occasionally two girls under the bed as well. Only the ones who were dying or in great pain could have their bed alone. Many of them with unborn babies – mother, and foetus both with malignant tumors and other unspeakably terrible diseases.

Dr. Phuong stopped to hold the hand of a young girl, crying, and gasping from pain.

“I can do nothing for her or the many others, except trying to ease the pains during the time they have left,“ the doctor told me.

I remember the orphanages as well, full of children with mental and physical disabilities. Until then, I did not know that human arms and legs could look like branches of an old tree.

During the following month, my photographer and I went all over Vietnam to record the long-term consequences of Agent Orange in Vietnam.  We went on to include the desperate calls for help from American war veterans and their families, suffering just as much from exposure to Agent Orange.

When I returned to Europe and published my first reports on Agent Orange, they were written off by some as communist propaganda. The US Embassy in Denmark went out of their way to destroy my credibility with a discreet phone call to my editors sharing the concern that the reputation of my newspaper was damaged by my unfounded allegations.

This first experience with the Agent Orange cover-up fueled an anger inside of me which has continued to burn ever since.  Over the years, I have continued to use every opportunity, to highlight the ongoing suffering of Agent Orange victims in Vietnam and elsewhere. I have written hundreds of articles, given many lectures, and been involved in fund raising in my own small way.

AN ODYSSEY OF MISERY

At one point, I set out to gather evidence, how Agent Orange continues to affect the Vietnamese people. It became an odyssey of misery, which I have never been able to put behind me. I visited several villages in the North with many former soldiers who had returned from the contaminated battlefields in the South decades ago.

In provinces like Hai Duong, Thai Binh and Nam Dinh, I met scores of 2nd and 3rd generation victims, and their desperate parents, who all asked the same question: Who will take care of our disabled children, when we are dead?

The same happened among the poorest of the poor in the Central Highlands and in Da Nang, where people suffered from continued exposure of chemicals, which had seeped into the ground under the former US Airbase.  The dioxin contamination level there was more that 300 times the safety limit.

A LETTER TO OBAMA

At the Tu DU hospital in HCMC I got myself the sweetest young friend, Hoan, born without lower legs and with one arm only.  She had just written a letter to US President Barack Obama ask him to help the Agent Orange victims in Vietnam. She never received any reply from the White House, but then again, in a way she did get a belated response from the president.

In 2016, during Obama’s official visit to Vietnam, he became the first US president ever to officially acknowledge the Agent Orange issue in his ‘Remarks to the Vietnamese people’.

Prior to this the US has never officially admitted any responsibility for the Agent Orange tragedy, even though they have given medical support to affected US veterans and their families-

In all fairness it must be said that the US government also – and for more than a decade – has supported the clean-up of the Da Nang airbase as ‘an environmental support’ project and sponsored several programmes to support programmes for disabled Vietnamese, without officially acknowledging any link to the Agent Orange exposure. For that reason, Obama’s speech was a very important change of US policy.

Most recently, the US has also committed support to the clean-up of the former US airbase in Bien Hoa, which will be a huge challenge financially as well as timewise. Good news, indeed.

Unfortunately, funds are still far from sufficient to assist the thousands of victims in Vietnam and elsewhere.  Some hope is growing, now that a Vietnamese woman in France has sued the US companies, who produced Agent Orange.

The hope is based on the fact that a janitor in the US recently won a court case against Agent Orange manufacturer Monsanto. The court awarded him a compensation of USD 289 million. He had contracted cancer due to his exposure of similar kind of herbicides, which he used for clearance of weeds on the school premises, where he worked for decades.

My own pessimism is based on the previous court cases by Vietnamese victims, refused without exception by US judges.  We shall wait and see, what happens now. In the meantime, thousands of people have died in Vietnam from cancers that used to be rare in this country. 2nd and 3rd generation are abundant. Just visit Tu Du hospital in Ho Chi Minh City or the ‘peace villages’ in the North and see for yourself.

From time to time, I reunite with Dr. Phuong, most recently 3 weeks ago. At 77, she is supposed to be retired. Nevertheless, she came late for her appointment with me because she had performed emergency surgery on three complicated cases the same morning.  They might not have been due to Agent Orange, but Dr. Phuong is adamant that we have not seen the last victim yet of this lethal legacy.