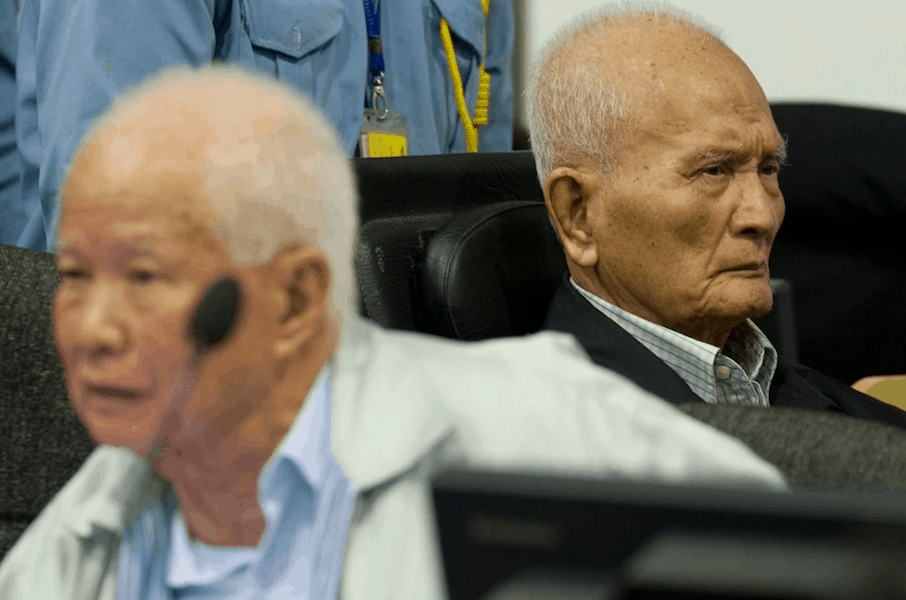 This article originally appeared at the nytimes.com
By Seth Mydans

PHNOM PENH, Cambodia — They were neighbors, two elderly retirees tending their gardens and playing with their grandchildren, hoping that the world would “let bygones be bygones” and forget they had been leaders of the murderous Khmer Rouge regime.

But their retirement did not last. Eleven years after their arrest, and aftera long and expensive trial, they stand as the only surviving members of a tight-knit Communist leadership to be held responsible for the killing of at least 1.7 million of their countrymen from 1975 to 1979. On Friday, a tribunal found them guilty of genocide.

One of them, Khieu Samphan, 87, was once an admired, incorruptible schoolteacher and member of Cambodia’s Parliament, who fled arrest for his leftist views in the 1960s and joined the young insurgent movement in the countryside. Suave and multilingual, he later became the international face of the Khmer Rouge as its nominal head of state.

The other, Nuon Chea, 92, the movement’s ideologue, was perhaps the truest believer in its attempt to turn Cambodia into an agrarian utopia, killing off its educated people and reorganizing the country into what amounted to a nationwide labor camp. Known as “Brother No. 2” to the late Khmer Rouge leader, Pol Pot, Mr. Nuon Chea had command responsibility over a wave of murderous purges. He later assured an interviewer that “we only killed the bad people, not the good.”

After the Khmer Rouge were ousted by a Vietnamese invasion, they retreated to the jungles, where they became once again an insurgent army in a civil war. Their leadership collapsed in 1998 after a series of defections to the government.

When Mr. Nuon Chea and Mr. Khieu Samphan defected that year, Prime Minister Hun Sen, who himself had been a lower-ranking Khmer Rouge cadre, greeted them with handshakes and counseled his countrymen, in an unfortunate phrase, to “dig a hole and bury the past.”

They were billeted in a luxury hotel, where the comforts included fruit baskets. But before they could absorb this warm welcome, they were besieged by a gantlet of jostling, shouting reporters outside the hotel.

“They’re going to start a riot!” exclaimed Mr. Nuon Chea, a frail, bent man who walked with a cane and peered at the world through large dark glasses.

Mr. Khieu Samphan, ready to embark on a fresh new life, had dyed his white hair a rich chestnut brown, as if hoping to reclaim the respectability he had known as the Khmer Rouge’s chief diplomat.

At a noisy news conference, which I was covering for The New York Times, he presented his formula for the post-Khmer Rouge years. “Let bygones be bygones,” he said.

Claiming only now to have learned of the atrocities committed under his command, Mr. Khieu Samphan said, “It is normal that those who have lost their families, that they — what to say — feel some resentment.”

Asked whether he, too, had an apology, Mr. Nuon Chea offered what seemed a glimpse into a very strange mind-set, saying: “We are very sorry not only for the lives of the people of Cambodia, but even the lives of all animals that suffered because of the war.”

Their humiliation only increased when Mr. Hun Sen, still treating them as honored guests, sent them on a trip to the beach, where they spent a dreary New Year’s Eve cowering in their hotel rooms to avoid the besieging reporters.

“Please have some sympathy with me,” Mr. Khieu Samphan said forlornly. “I need to have some rest.”

They retreated to their refuge in the remote border town of Pailin, where most residents were also former Khmer Rouge, until their arrest in 2007. Since then they have remained neighbors, in side-by-side holding cells.

They were tried alongside two other surviving members of the top leadership, both of whom died during the trial, as well as the prison commander Kaing Guek Eav, or Duch, who was convicted and is serving a life sentence.

While Mr. Khieu Samphan clung to his defense that he was “not aware of the heinous acts committed by other leaders,” Mr. Nuon Chea remained defiant and contemptuous to the end.

In his final statement to the court, he pointed to his 500-page closing brief, including 4,000 footnotes, which his lawyer, Victor Koppe, said presented the real history of the Khmer Rouge, “and not some quote-unquote fake history.”