Wedding goes on as scheduled, after cluster bombs are removed from family garden 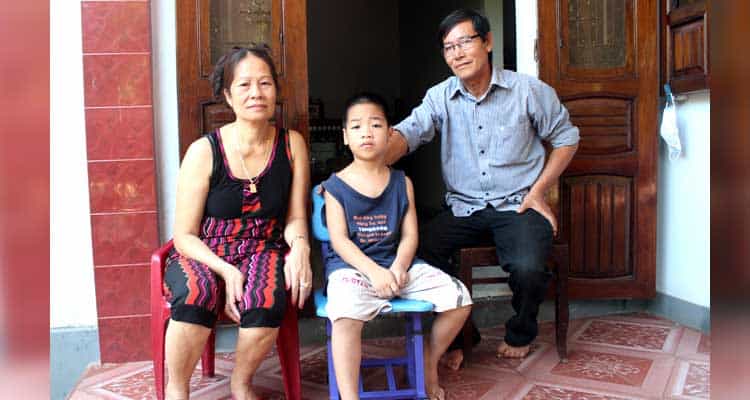 Cam Lo, Quang Tri (26 June 2014) – A family of seven in An Hung Village has peace of mind now, after two deadly cluster bombs and one rifle grenade were safely destroyed from their garden on Wednesday by one of Project RENEW’s mobile Explosive Ordnance Disposal (EOD) teams.

Mr. Nguyen Van Binh and his family could hardly wait until this weekend for the wedding they organized for their youngest daughter, Huyen Mi. Since they had a long guest list for the big event, they decided they should level the front garden to have enough room to set up the wedding tent.

Their excitement was dampened on Monday, however, when Mr. Binh suddenly uncovered a cluster bomb while preparing the ground.

“I was flattening the garden when I realized I had just dug up a bombie,” said Mr. Binh. “I was so shocked! I stopped working immediately and went back into my house. After I calmed down, I called Project RENEW’s hotline number to report the bomb discovery, and asked them for help,” he said.

One of many villages along Highway 9 in Cam Lo District, An Hung Village was heavily bombed and shelled during the war, with much fierce ground fighting. This is why the area remains heavily impacted by unexploded ordnance (UXO) even though the war ended nearly 40 years ago.

According to Mr. Binh, many people in his village were killed or injured by cluster bombs while reclaiming land for farming and home building in the early years after the war ended. Binh himself is a victim of a cluster bomb. An accident in 1982 claimed one of his eyes, and injured another man in his village, while they were farming.

“This successful EOD task gives the family a safe garden area to organize their daughter’s wedding, and reassures the whole village,” said Jonathon (Gus) Guthrie, Country Director of Norwegian People’s Aid (NPA). “It is just another example of our daily efforts to make Quang Tri Province safe from cluster bombs and other ordnance.” NPA has been the primary technical partner and largest donor for Project RENEW since 2012.

According to Guthrie, in addition to providing EOD quick response to UXO sightings within 24 hours, NPA is supporting Project RENEW to conduct “cluster munitions remnants surveys” in Cam Lo and Trieu Phong Districts, as a rapid method for identifying confirmed hazardous areas that need full clearance. “The objective is to place full clearance assets where they are needed the most,” Guthrie explained. “We get better results, faster, at less cost. And local Vietnamese know with confidence that their lives are safer.”