What Happens If Trump Refuses to Leave? Military’s Role in Civil Unrest 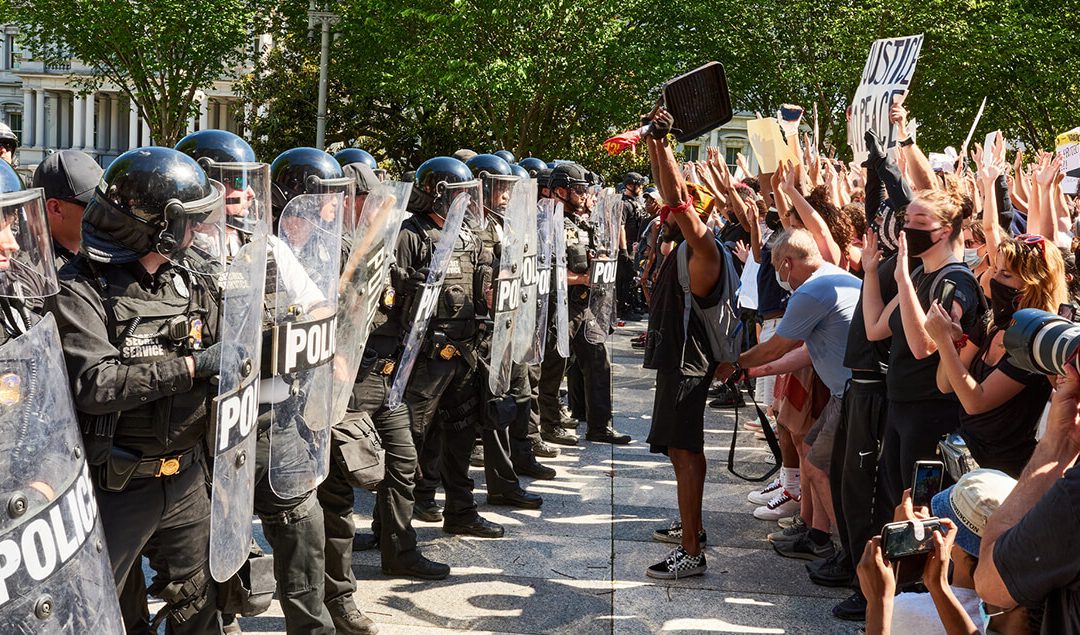 By Jeff Paterson. Reprinted with permission from Courage to Resist

Recently, Democratic presidential nominee Joe Biden grabbed national headlines by sharing that his greatest fear is that President Trump will “try to steal this election.”

Looking at Trump’s own comments, it’s a legitimate fear. Trump has on many occasions shown open admiration for rulers of countries known for suppressing political opposition and violating international human rights in their quest to maintain power, including Vladimir Putin of Russia, Kim Jong Un of North Korea and Tayyip Erdogan of Turkey.

If Trump loses, what will citizens like you and I do?

This raises the question: if Trump tries to interfere with a fair election or refuses to leave office if he loses, what will citizens like you and I do?

These past few weeks, the Black Lives Matter protests have been a powerful testimony to the impact of collective action. Hundreds of thousands of people have filled the streets in cities across the U.S. in response to the murder of George Floyd to draw attention to systematic racism and call for reforms. In response to the public pressure, the House of Congress has proposed a sweeping police reform bill.

Trump, on the other hand, has threatened to use the military to suppress domestic protests and citizens’ freedom of speech. On June 1, President Trump ordered military and police to clear peaceful protesters from the front of the White House to make way for a photo op. They did so using dangerous rubber bullets, noxious gas, and flash bangs. According to The New York Times, Trump also wanted to invoke the Insurrection Act to override objections of U.S. governors in deploying active-duty troops to other states. Trump has been a consistent advocate for expanding the use of military on U.S. soil, having already set a dangerous precedent by using the military for civil law enforcement at the southern border. Who’s to say he might not try a similar tactic to undermine our democracy around the election?

We can’t just sit by and hope for the best

As citizens, I’m afraid we can’t afford to just sit by and see what happens next. The string of lies and corruption that have been a hallmark of this presidency reveal what is at risk. Biden has said that if Trump hesitates to leave office after losing the vote, he believes the military would escort him out. However, while members of the military refusing illegal orders in order to side with democracy will be critical to any resistance movement, I believe the actions of regular citizens will play a crucial role in encouraging members of the military to do the right thing.

We have seen already how this can work in the case of the Black Lives Matter protests. Following massive public outcry, prominent military personnel have been objecting publicly to Trump’s use of the military to attack peaceful protesters. Earlier this month, Chairman of the Joint Chiefs of Staff General Mark Milley apologized for appearing publicly next to President Trump during the June 1 event. Ex-Defense Secretary and retired United States Marine Corps general James Mattis condemned Trump’s actions and publicly voiced support for the goals of the Black Lives Matter protests. And four-star General Robert Abrams held a town hall with black service members called for action to address racism in the military’s own ranks.

An increasing number of National Guard members and other U.S. soldiers on the frontlines are expressing political objections to Trump’s anti-democratic actions as well.

One National Guard member, who enlisted with hopes to help provide medical services in natural disasters, told Truthout, “I can’t do it. Even looking at my uniform is making me feel sick that I’m associated with this, especially after [the National Guard unit] shot that man who owned that barbecue shop [in Louisville, Kentucky].”

Another stated, “I feel that I cannot be complicit in any way when I’ve seen so many examples of soldiers and police acting in bad faith,” and expressed concern that “We have not had any training or conversation relating to de-escalation tactics.”

Yet another told Politico that “a lot of us are still struggling to process this, but in a lot of ways, I believe I saw civil rights being violated in order for a photo op. What I just saw goes against my oath.”

The military oath of office says, “I, [NAME], do solemnly swear (or affirm) that I will support and defend the Constitution of the United States against all enemies, foreign and domestic.” Articles by retired Chief of Staff at Special Operations Command, Central, Andrew Milburn on the U.S. Army’s own website and elsewhere assert that “Any member of the military has a commonly understood obligation to disobey an illegal order” and that “As officers, our oath is to the Constitution rather than to any individual or administration.”

“People’s eviction” may be required

However, we know that in practice, soldiers disobeying orders for conscientious reasons often face punishment after court martial unless they have strong political support on their side. Research shows military personnel can play an important role in helping stop authoritarianism, such as in Tunisia, Egypt and Myanmar (Burma), but in each case public pressure played a crucial role in convincing members of the military to break ranks.

While the U.S. may not be in as dire of a political crisis yet, it’s not out of the question that we could find ourselves there soon. We have an administration that has succeeded in desensitizing much of the public to regular violations of previously valued norms and civil rights. History in countries around the world, from Nazi Germany to the Congo, tells us that given the right circumstances the slide from democracy to dictatorship can be quick and unexpected.

This makes the actions of vigilant citizens and activists that much more important. Courage to Resist has already been raising funds for the legal defense of National Guard members who refused to deploy against peaceful protesters. Supporting these brave service men and women is one way to send a message that can embolden more to take a moral stand in the future.

Additionally, civilians and veterans have an important role to prepare for. We need to be ready for a “people’s eviction” if necessary. The military is much more likely to “do the right thing” with tens of thousands surrounding the White House and every county courthouse or city hall in America.

If Trump tries to order the military to further degrade our democracy, massive nonviolent mobilizations are our best chance to create pressure for service members to stand down, and side with the people and the Constitution instead.

Top photo by Geoff Livingston, May 30, 2020. “Protesters take the Black Lives Matter cause to Capitol Hill on and the White House on a second day of DC protests against the police brutality in the death of George Floyd.”