Which 50th anniversary pin will YOU wear? 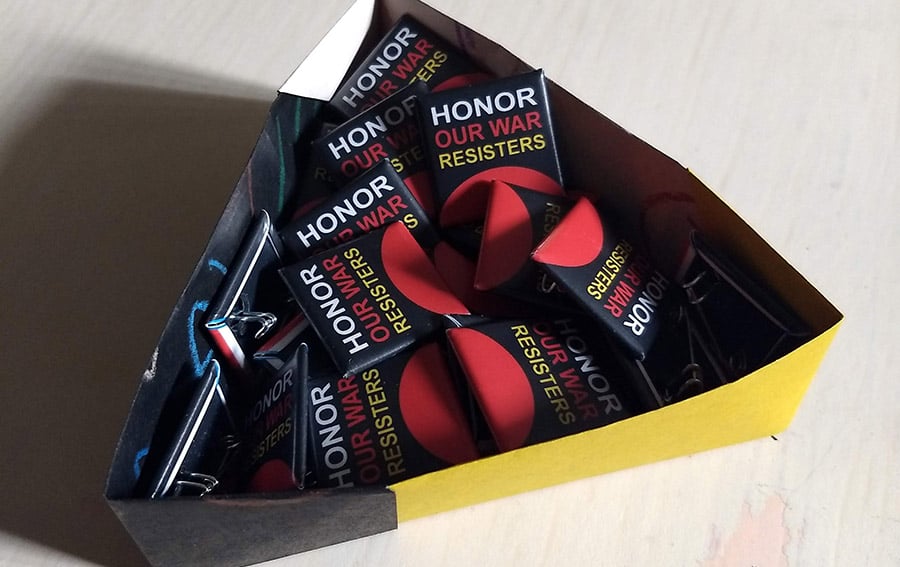 Might we engage [our] members in an oversight-and-response campaign to items such as this, to focus on other lessons that might be learned, contrasting the symbolic value of a lapel pin with the very real needs of healthcare and other needs of an aging Vietnam vet population, for example?  …

We might even contact Congresswoman Kuster directly, and engage her on costs of military interventions and post-war consequences for veterans and their families, as something that she should take into account as she endorses this symbolism and public posturing today.  No pettiness or mean criticism, just an invitation to consider the full ramifications of war policy and later consequences.

In contrast, on August 7th, era-veteran Tarak Kauff offered this:

I feel compelled to say something about the lying hypocrisy and moral blindness of this 50th Anniversary pin program…. The Congresswoman…, prompted so obviously by the Pentagon, says,  “This project is a token of our gratitude for their selfless service and steadfast, unwavering devotion to our nation and the American people.”

How about the truth, that this project is yet another propaganda project to make the American people forget that these men and women were pawns, duped and used in a premeditated criminal war that murdered over 3 million Vietnamese people, destroyed three countries, and left a lasting legacy of toxic poison and unexploded ordnance in those countries.

Adding insult to injury, these men and women, who were duped under the guise of patriotism, or as with many, forced to take part in this unforgivable criminal enterprise so that American oligarchs could increase their fortunes by the business of war – these men and women, who became accomplices in war criminality of the worst order, were treated by their government and the oligarchs who run and still run this government, they were treated like shit and given very little real care when they came home.

And the worst thing, the most unforgivable thing, is that the lying propaganda goes on unabated so that those in power, those uber-wealthy oligarchs can make and justify even more wars and killing, while the country gets more morally and financially bankrupt, so that these oligarchs keep the blood money individual profit-making rolling in.

Phew! Mean criticism? Or truth? You get to decide.

Thank you for your service!