“Winning the Hearts and Minds of the People!” 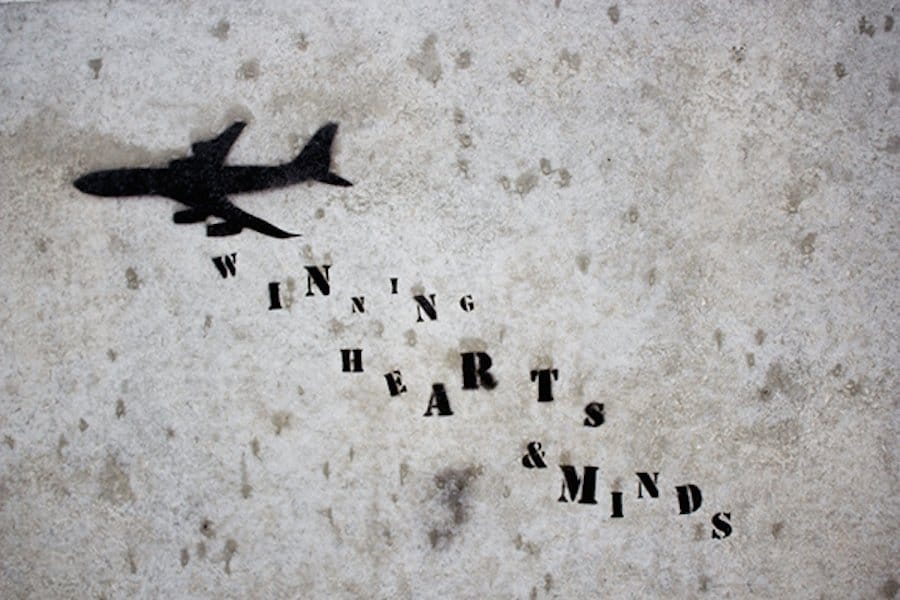 As a veteran and anti-war activist since 1964, viewing most of Ken Burn’s documentary The Vietnam War I am worried not so much about the content or quality of the film, but about its long term effect on the public’s understanding and acceptance of the current and future such wars.

Most of the reviews especially by other veterans of the war and anti-war movement, agree the film is flawed and point out historical and political discrepancies. Most also recognize that Burns presents a middle-of-the-road position and he admits his aim is to resolve the conflicts the war left in the U.S.

While most critics focus on the films accuracy or focus and hope the film will provide a base for further understanding, few discuss the likely ongoing effect on a public which knows little of the US war on Vietnam, Laos and Cambodia and is often accepting or confused about the current seven ongoing wars. My observation is that efforts by veterans and critics have not been allowed equal time at film previews nor can they compete with the massive public hype around this historic event.

The film does show much of the ugliness of U.S. motives and actions. But will showing these flaws and U.S. bias help or prevent most U.S. viewers to develop a full awareness of the troubling lessons? Will the weaknesses and omissions of the film succeed in smoothing over the more vile and aggressive causes of the U.S. aggression and conduct of the war? Will this film by excusing U.S. aggression and war crimes make it easier for the U.S. government to continue and expand its current and future wars?

Therefore I have 2 major disagreements with the argument that the film should be judged separately from its public affect.

1st, it is not just a film. Many reviews focus on the discrepancies with the facts and interpretations of the political history. This approach supports the conclusion that this film series can and should be something to build on. I agree we should build upon the film since it will be a major public event whatever its weaknesses, but because the film is likely to dominate public opinion, it is all the more important we consider what the overall political impact will be and what can be done to mitigate the damage.

2nd, will it really promote peace? Most of the reviews and critiques of the film are from those who already know a great deal about these issues. However the most important impact of this film is not as entertainment or even a historical record, but its special and likely massive potential impact on the general public’s awareness and interpretation of the meaning of that war. In a time of ongoing wars and charges of war crimes, the U.S. Pentagon recognizes the public’s view of the Vietnam War can influence public support or opposition for its current and future wars. Therefore the Pentagon has initiated a massive 13 year campaign to present and organize public awareness to support the Pentagon’s point of view.1 In the middle of this massive Pentagon campaign to re-write the Vietnam War history and white-wash the war crimes and anti-war movements, PBS’s 18 hour series will play again and again and become an important part of the public’s education.

Is there any question whether this film’s effect will agree with the Pentagon’s view or be counter to it and even if it helps to educate the public? How effectively it builds support or opposition to ongoing wars will be the major test of this film series.

And then will this film help or hinder the pentagon’s effort by rewriting the history of this war to protect the US from any quilt or blame for its past and continuing war crimes?1

At a time when the President surrounds himself with generals and actions that risk adding major wars in Asia and Africa to the ongoing 7 wars so little understood or opposed by the general public, I am reminded of that phrase we all remember, “winning the hearts and minds of the people!”

Since the US public is the real target and their reactions will determinant the effectiveness of this film, we should ask how will this film influence the less informed public. Will it reveal that the U.S. intentionally started the war for only slightly hidden Imperial purposes? Will it reveal the many systemic war crimes detailed in the pentagon papers and discussed in Congress? Will this film help change the views of those who have heard for 50 years how we should have won the war and it was a mistake not to support the troops? Will they finally realize they were being massively lied to just as they have been lied to since? Will it build opposition or support for the ongoing and new wars?

The reviews I’ve read fall into two general categories, those who consider The Vietnam War as a portrayal of a major error and the others including a spectrum of those who see the war as a major moral crime that should teach us to guard against those who try to rationalize or recreate such wars. Today most of us know not to trust the Pentagon, but how many will be deluded by Ken Burns into agreeing that the war was started by people with good intentions?

The public’s awareness is likely to be split since most know little about the facts or causes of the war. Using this film to teach one-on-one, many of us could easily debunk and correct the glaring historic distortions and counter the pentagon’s 50th anniversary effort. But if those of us who are opposed to the U.S. claims and actions that led to this terrible war, soft pedal our responses, it is very unlikely we will have an opportunity to protect the larger public from once again being misled by what I believe is a major propaganda documentary.