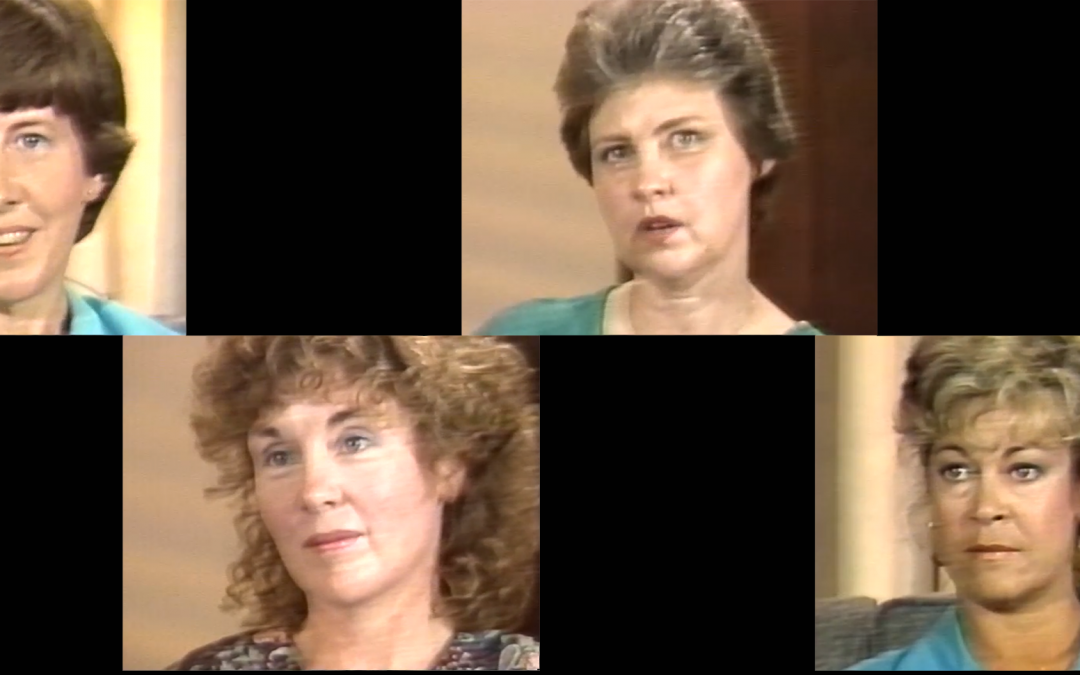 This hour-long video consists of oral history interviews with four different women veterans. The interviews were conducted by Fred Milano in the summer of 1989. When Fred shared the archival footage with Veterans For Peace, we asked him to write the following introductory essay, which was published in the Summer 2020 issue of the Veterans For Peace Newsletter.

Shortly after joining the faculty of Appalachian State University in 1976, I introduced a new and highly controversial course, Sociology of War. According to Vietnam Veterans Against the War (VVAW), it was the first such course to ever be offered at an American college or university. Our country’s involvement in Southeast Asia had ended only a few years prior, so it seemed natural to focus on America’s longest and most divisive war. Furthermore, the topic was relevant because many students had a family member or other close relative who had served in Viet Nam. I regularly invited veterans as guest speakers, including several from Veterans For Peace Chapter 99 in Asheville, North Carolina.

The beauty of open discussions is the unexpected surprises that emerge. On one occasion, for example, a dozen high school history books were passed among the students. Imagine their surprise to discover that every textbook condensed the entire Viet Nam conflict to just two or three sentences. Moreover, the coverage was heavily sanitized, with no mention of vital facts such as the massive U.S. bombing campaign, the millions of Vietnamese dead, or the environmental devastation. Also missing was any reference to key issues in that war: the Pentagon Papers, the antiwar movement, Kent State, the Gulf of Tonkin incident, the My Lai Massacre, Agent Orange, the fabricated body counts, COINTELPRO and the illegal government spying on its own citizens, and so on.

A constant problem in bringing speakers to the course was the scarce supply of women veterans. In fact, this gender imbalance was the deciding factor that persuaded me to make a documentary.

Despite a clear pattern of participation in our nation’s wars, many of the contributions of women have either been overlooked or minimized. In World War I, some 21,000 nurses served in the Army, and at least 400 of them died. By World War II, the numbers increased to 60,000 Army nurses and 14,000 Navy nurses. In Korea, 500 Army nurses were called to duty. Then came Viet Nam. Among the 265,000 women in the military during that time were 11,000 nurses who served in-country. The names of eight of those who perished are carved on the Women’s Memorial in Washington, D.C.

This documentary is a tribute to oral history and its ability to preserve the experiences of these women. I was convinced that their stories would be more powerful and moving if told in their own words rather than in written form. Those who viewed the film would hear the full range of what these young nurses had endured: the fears and horrors, the means devised to cope with the extreme stress, the flashbacks and nightmares, the acts of self-sacrifice and bravery, the friendships formed and the camaraderie.

So how and where did I find the participants for this project? Being in a small town and a predominantly rural county proved to be a challenge. Initially I could not locate a sufficient sample, so I widened my search to nearby metropolitan areas such as Charlotte and Raleigh, N.C. Eventually, after countless phone calls and pleas for assistance, I found four nurses and two Red Cross volunteers who had been to Viet Nam. Five of the six consented to be interviewed. One individual later withdrew after her supervisor at a VA hospital threatened her with a warning that it would be harmful to her career.

Armed with a meager, shoestring budget, the film was nevertheless completed in 1990. A few months later we all met at the home of one of the participants to watch the finished film. Afterwards I presented each of them with a personal copy to express my appreciation and to provide a lasting memento for their family history.

Fast-forward to the year 2020. With the advantage of hindsight, do I have any regrets about the film? Yes, an especially painful subject was purposely avoided. No questions were asked about physical and sexual assaults committed against them. Such inquiries seemed to me to be inappropriate and insensitive. Might it cause them, I worried, to relive the violence and trauma stemming from those brutal crimes? So for better or worse, I chose not to follow that path.

Whenever I show this film, I conclude with a suggestion to my audience. I urge them to become their own non-Hollywood version of a cinematographer. Since virtually everyone nowadays owns a cellphone, sliding into the role of filmmaker is an easy task. Simply sit down with a veteran (preferably a relative, friend, or acquaintance) and ask them to share their military or wartime experiences. My motive is prompted by demographics, the constant shifts in our population. Most Viet Nam veterans still alive today are in their 70s and beyond. More troubling is the rapidly decline in numbers of World War II veterans, with 400 of them dying each day. The last remaining members from those generations are quickly disappearing, so get out those smartphones and start recording!

Fred Milano, professor emeritus of sociology, is a longtime member of Veterans For Peace. He was a captain in the U.S. Air Force (1963–1968) during the Viet Nam era.